Located in northern Benton County with the Priest Rapids Dam to the west and the abandoned town of White Bluffs to the east, Vernita marks a historic embarkation point for travelers crossing the Columbia River. Local Native American tribes traversed this region thousands of years before European settlement, and the Wanapum Indians in particular valued the Priest Rapids Valley as a bountiful Sockeye Salmon fishery during the fall and a seasonal camp during the winter. The mid-nineteenth century saw an influx of Euro-Americans to the region as prospectors searched for gold and farmers traveled en-route to the Willamette Valley of Oregon. Although the region’s dry terrain attracted few farmers, ranchers valued the vast, unfenced open spaces and the plentiful bunchgrass that could be used as fodder for cattle and horses. After harsh winters in the 1880s destroyed cattle herds throughout the Washington territory, settlers near Priest Rapids Valley, inspired by a growing faith that modern science and engineering could reshape desert environments into lush farmland, turned increasingly towards agriculture as a source of subsistence and profit.

Vernita was one of the many small communities that developed during this period of settlement at the turn of the twentieth century. Before the construction of railroads, river steamers and ferries were lifelines for these secluded communities, providing critical transportation and shipping services. Although residents had long preferred to cross the Columbia several miles east at the White Bluffs ford where the soil was firmer than the sandy banks further towards Priest Rapids, this did not stop German homesteader Otto Jaeger from opening a ferry business at Vernita in 1901. A fixture in the Vernita farming community, Jaeger maintained a home described by historian Martha Berry Parker as “a mecca for travelers and wayfarers.” In the late 1900s entrepreneur Jackson T. Richmond assumed control over the Vernita ferry, and in 1908 he replaced Jaeger’s older oar and current-powered vessel with a newer cable ferry. The eponymous “Richmond ferry” operated until 1943, providing vital transportation to local passengers and livestock alike. A public ferry service was revived in 1957 as part of a Washington State highway initiative, and remained in service until the construction of Vernita Bridge in 1965.

Irrigation was as vital to the early survival of the Vernita farming community as river transportation, and Vernita farmers were often forced to rely on private businesses such as the Priest Rapids Irrigation and Power Company (PRIPC) and its successor, the Hanford Irrigation and Power Company (HIPC). In 1908 the HIPC’s construction of the Priest Rapids Powerplant and the Coyote Rapids Pumping Plant (Allard Pump House) helped provide irrigation to the Priest Rapids Valley, but technical and financial difficulties hindering waterflow and corporate solvency ensured that access to water remained a perpetual concern for farmers. Vernita farmers found that most crops could grow with proper irrigation. Although apples, peaches, cherries, and apricots were staple crops, the region’s climate is hospitable to a wide variety of produce ranging from strawberries and melons to tobacco and peanuts. One particularly notable example occurred in 1940 when the Kennewick Courier-Reporter announced that farmers at Vernita had discovered a new variety of fast ripening apricot in Paul Bruggerman’s orchard that they had christened “Riverland Moorpark.” Indeed, farmers and journalists often declared that crops grown at Vernita ripened earlier than produce grown in other areas of the state, a fact advertised by valley boosters seeking to encourage new settlement. Although the first farmers at Vernita shipped fresh produce to market via riverboat, shipping schedules became more consistent and dependable in 1913 when the Chicago, Milwaukee and St. Paul Railroad extended a branch through Vernita on its route from Beverly, Washington to Hanford.

Despite these changes, Vernita remained a small town throughout its existence, dwarfed by the neighboring town of White Bluffs which had a population of 500 by 1940. Residents maintained an adequate education system with some difficulty. Although children attended elementary school within Vernita, high school students were forced to travel to White Bluffs. This shortage of educational facilities was exacerbated in 1929 when the Vernita school building was destroyed by fire, an omnipresent threat on the dry and windy shrub steppe. The Great Depression brought economic hardship to Vernita as produce markets collapsed, although farmers had the advantage of being able to grow their own food. The economic crisis spurred a wave of federal spending that directly impacted the lives of Vernita residents. A country extension school was established in Vernita in 1933 to provide farmers with access to the latest agricultural research and techniques. Vernita’s industry also evolved during the early 1940s when the Bonneville Power Administration constructed a new substation next to the town. Named “Midway Substation” for its location between the newly completed Grand Coulee Dam and the Bonneville Dam, this facility was a valuable source of employment in the region.

Locals had little time to benefit from these developments. In March 1943, shocked and angry residents throughout the Priest Rapids Valley received government notifications stating that their properties had been acquisitioned for the war effort. Vernita’s proximity to the Priest Rapids Power Plant and the Midway Substation was a blessing for some of Vernita’s residents. Although towns like Hanford and White Bluffs were bulldozed during the construction of the Hanford Site, Murrel Dawson recalls that the government allowed her father to remain in the Priest Rapids Valley until 1948 to operate the power plant. Vernita itself survived into the 1970s as a company town housing the families of several Midway Substation employees. The stretch of river next to Vernita Bridge and townsite remains a popular destination for salmon fishing, but little remains of the once vibrant agricultural community. 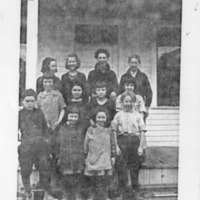