The name Hanford is forever tied to the Manhattan Project and construction of the first atomic weaponry, but few traces remain of the town upon whose ruins the nuclear age was born. Although the town of Hanford was less than 40 years old when government bulldozers leveled its buildings to construct plutonium production facilities in the early 1940s, its residents had already built a resilient community and agricultural economy. Irrigation water was the lifeblood for many farming communities and Hanford owed its existence to large-scale irrigation projects. Entrepreneur Manley Bostwick Haynes and his father-in-law Judge Cornelius Hanford led these efforts, founding the Priest Rapids Irrigation & Power Company (PRIPC) in 1905 to irrigate 32,000 acres in the Priest Rapids Valley. These development efforts depended upon the successful establishment of a company town in the region, a seed Hanford and Haynes hoped would blossom into an economic powerhouse.

Early disagreements over the best location for a town contributed to the dissolution of the PRIPC. Some investors, including Hanford and Haynes, established the Hanford Irrigation & Power Company (HIPC) while others formed the White Bluffs Irrigation Company (WBIC). Although the old town of White Bluffs had been located along the eastern bank of the Columbia River, the WBIC established a new townsite on the western side where there was more space for growth. In 1907 the HIPC established its own town roughly seven miles downriver from White Bluffs, naming the community Hanford after the company’s president. That same year the HIPC completed the Hanford Ditch, an irrigation canal channeling water at Coyote Rapids to farmland near Hanford. In 1908 while engineers completed a power plant at Priest Rapids and a pumping station (Allard’s Pump House) to supply water to the Hanford Ditch, Daniel Pratt of The Ranch lauded the project as “A Great Irrigated Empire in the Making.”

The HIPC shared this enthusiasm. Before the town had even been established, they advertised the fantastic profits to be made by those purchasing land at Hanford. As a result, Hanford quickly boomed. In 1908 The Spokesman-Review estimated a population “of between 200 and 300 people.” By 1910 the population numbered 369, and several businesses dotted the town. The Jahnke and Parker Bank opened its doors, and newcomers rested at the newly constructed Planters and Columbia Hotels. Initially, a single building served as both a school and a church. Eventually Hanford grew to contain several churches and denominations and in 1917 the town constructed a new high school for local children.

The HIPC helped establish a town ferry service to compensate for the poor roads and dearth of bridges that hindered travel in the region. Their crowning achievement came in 1913 when the Chicago, Milwaukee and St. Paul Railroad built a branch from Beverly to Hanford, allowing farmers to consistently ship produce to market. The fertile soil of the Priest Rapids Valley proved excellent for growing high quality soft fruits, berries, and grapes as well as alfalfa and asparagus. However, farmers also needed a reliable irrigation system, something the HIPC struggled to provide. The Hanford Ditch was prone to washouts and seepage; expensive problems frequently encountered due to the loose, porous soil of the Priest Rapids Valley. For two decades the HIPC sputtered in the face of financial crises and litigation until disbanding in 1930 to be replaced by the Priest Rapids Irrigation District.

Hanford continued to grow despite these problems, albeit at a slower pace. By 1940 roughly 463 people lived in Hanford, a long way from the optimistic 40,000 predicted by The Wenatchee Daily World in 1907. Fires periodically damaged the town, most notably in 1910 when much of Hanford’s business district burned and during the winter of 1936 when fire destroyed the Hanford High School. Daily life was difficult, and families worked together to plant, cultivate, and harvest crops. Many farmers struggled to survive and often worked odd jobs to supplement meager farming incomes. The Great Depression exacerbated this poverty. Nevertheless, resident Robert Brinson remembered Hanford was a safe community where “people… helped each other,” and many Priest Rapids Valley inhabitants later recalled feeling a strong community spirit. Social activities defined life in Hanford. Local organizations included The Grange, local churches, and the town band, while events ranged from community fairs and July 4th celebrations to school sporting events.

On a national level, Hanford citizens thought of themselves as patriotic Americans, and during World War I and World War II raised money for the Red Cross, rationed food, sent care packages to soldiers overseas, and performed military service. Washington State allocated land near Hanford for the Land Settlement Act of 1919, a program designed to provide subsidized land to veterans. The impacts of World War II hit closer to home. Hanford residents were anguished when they received letters in March 1943 notifying them that their property had been acquired by the United States government and that they had a month to vacate the premises. After the Manhattan Project destroyed the town of Hanford, many displaced residents felt grief for the community they lost and for decades held reunions to keep old friendships alive. Today little remains of the once bustling town except for faint irrigation ditches and the ruins of the abandoned Hanford High School silhouetted against the sky. 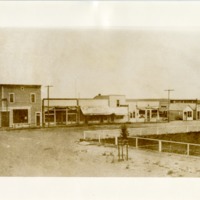 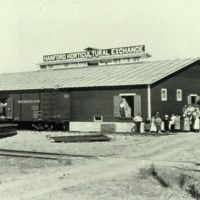 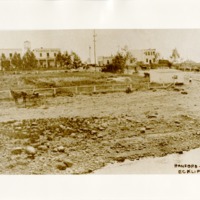 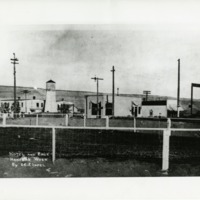 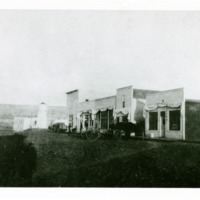 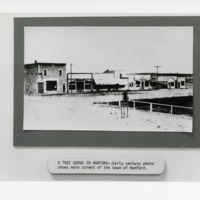 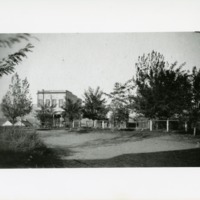