At the turn of the nineteenth century, farmers and entrepreneurs dreamed of large irrigation projects to transform the arid Priest Rapids Valley into a fertile breadbasket rivaling California. Soon irrigation ditches and canals both real and planned crisscrossed the region. Constructed in 1892, the Horn Rapids Dam (renamed Wanawish Dam in 1997) was the cornerstone to irrigation efforts along the lower Yakama River, controlling water levels and enabling the communities of Kennewick and Richland to thrive.

Horn Rapids Dam derives its name from its location on the Horn Rapids, a short strip of the Yakama River that makes an abrupt north-south U-turn before emptying into the Columbia. The Rapids are a traditional salmon and whitefish fishing ground for the Yakama and Wanapum Indian tribes, and a 1994 federal report clarifies that Wanawish in fact means “rock dam fishing place.” Native tribes gathered food throughout the valley during seasonal migrations, and Wanapum Chief Johnny Buck’s brother Frank remembered that the Wanapum Tribe often stopped at Horn Rapids during the middle of the summer. Native men fished off of wooden fishing platforms using spears and dip nets, while women on the shore sliced fish open to dry on poles. Although Euro-Americans forced many Washington tribes onto reservations, rights guaranteed by the Yakama Treaty of 1855 allowed Native Americans to continue fishing the Horn Rapids. These rights remain in effect today, and Native fishing platforms can still be seen along the Yakama River. Euro-American settlers fished as well, and even in 1914, lucky fishermen caught 30-pound salmon.

Euro-Americans soon saw the Horn Rapids as an important location for agriculture as well. Although construction of Northern Pacific (NP) rail lines during the 1880s facilitated settlement, farmers needed irrigation. The Yakama Irrigation and Improvement Company (YI&I) first tried to address this need. New York entrepreneurs founded the YI&I in 1888 and purchased thousands of acres of NP holdings in the Yakama Valley. Initial plans were to construct an irrigation canal near Kiona and two canals originating on either side of the Horn Rapids, one to irrigate Kennewick to the south and one to irrigate farmland in the north (this northern community became Richland in 1905). The YI&I purchased water rights to the Horn Rapids in 1891, and in November 1892 superintendent I. W. Dudley announced the construction of a concrete dam to “extend the width of the river bed [for] 600 feet.” This dam raised the height of the Yakama River to ensure canals received water throughout the year.

Despite the YI&I’s optimism, construction on its canal network progressed slowly, and the company faced persistent financial problems. Although they successfully extended the southern canal to Kennewick in 1893 it was expensive to operate and maintain. Seepage caused by loose soil was a constant problem. Even a decade later some canals in the region still lost over 25% of their precious water to leaks. These plans came to naught when financial instability, exacerbated by the national economic crisis of 1893 and damage from severe flooding in 1894, collapsed the YI&I.

Large scale irrigation projects were thus put on hold until NP employee Thomas Cooper arrived in the region in 1901. Cooper and other NP officials were optimistic about irrigation’s potential. The NP could make money selling water and the increased agricultural production would simultaneously increase rail traffic. That year the Northwestern Improvement Company (NWI), an NP subsidiary, purchased what was left of the Kennewick Canal and the Horn Rapids Dam. NP officials worried about putting all their eggs in the NWI basket however, and so in 1902 the NWI transferred its Kennewick assets to the Northern Pacific Irrigation Company (NPI), a separate subsidiary. In addition to repairing the Kennewick Canal the NPI extensively renovated the Horn Rapids Dam, constructing a more “permanent dam” in 1903 to provide water for its irrigation holdings. The new Horn Rapids Dam was constructed out of wood and rock using a timber crib design that remained unchanged for a century. Only after 1996 flooding severely damaged the structure did engineers install a concrete dam.

The Horn Rapids Dam is an example a successful early irrigation projects in the Arid West, providing vital water to farming communities on both sides of the Yakama River. Kennewick grew quickly over the next three decades as a result of the dam. Administration changed in 1918 when the newly formed Columbia Irrigation District (CID) assumed control of NPI’s holdings, including the Kennewick Canal and Horn Rapids Dam. On the north side of the Yakama River developments followed a similar trajectory under the direction of local entrepreneurs. The Lower Yakama Improvement Company and the Benton Water Company both tried to irrigate farms along the lower Yakama and in 1908 used their joint resources to construct the 15-mile Richland Irrigation Canal. This canal serviced farms around Richland until the town was annexed by the United States government in 1943. Land near Horn Rapids Dam was put to additional use when, in 1944, the American military constructed a facility called Colombia Camp to house the Hanford Site’s prison labor force. Even today Horn Rapids Dam remains vital to Yakama River irrigation and serves as a valued fishing ground for Native tribes. 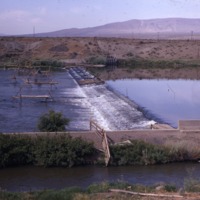 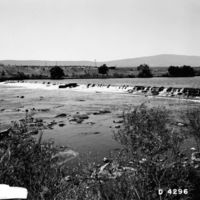 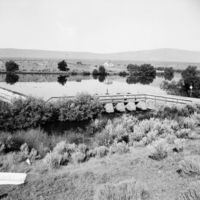 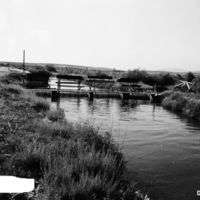 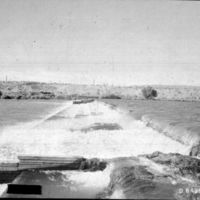