W. R. Amon and his son, Howard S. Amon, first settled in the lower Yakima Valley in 1904 when the pair purchased the large expansive Rosencrance Ranch, located on what is now Lee Boulevard and Goethals Drive in Richland near the Columbia River, from Ben Rosencrance. The following year in 1905, they purchased the Rich Ranch from Nelson Rich, a prominent local landowner, and a member of the Washington State Legislature from 1901-1902 and 1911-1913. The Amons quickly became prominent figures in the area as a result of their extensive philanthropy. The Amons were instrumental in Richland receiving its first telephone connections. Columbia Telephone System, a phone company based in the neighboring town of Kennewick, was able to provide phone service to Richland by extending Amon’s private line to the rest of town. This would have been a significant technological advancement for the small farming community. Not only would this have made communication between residents possible for social and emergency reasons, but it also would have connected Richland to the outside world. The Amons also invested in and worked to improve the small town’s irrigation systems. In the arid desert climate of eastern Washington, irrigation was crucial for survival. Settlers used various methods to bring water to their homesteads from digging wells and small canals and flumes. Some of the larger farms in the area were dependent on the enormous Rosencrance water wheel on the Yakima River for water. The Amons replaced this water wheel with a more effective gasoline powered water pump. In the spring of 1905, the Amons were among the founders of the Benton Water Company and quickly made a claim for 400 cubic feet of water per second from the Yakima River. This water was used for irrigation throughout the small town as well as for generating electricity for lighting and manufacturing. In the fall of 1908, the Benton Water Company and the Lower Yakima Irrigation Company merged, which ultimately led to the construction of a 15-mile long canal known as the Richland Irrigation Canal, which expanded the area that the irrigation system could reach, especially in north Richland.

The Amons were also instrumental in the mapping out and establishment of Richland as a town. By 1905 the father-son duo had acquired 2,300 acres and proposed a townsite. To decide on a name for the new town a contest was held. The town name suggestions were drawn from a hat, the last name drawn was the winner – Benton briefly became the name of the small town in honor of the newly established Benton County. The name, however, did not last for long, as the United States Postal Service rejected the name for being too similar to the name of another small Washington town in Pierce County: Benston. As a result, the town was named Richland after Nelson Rich, and officially incorporated in 1910.

In 1911, Howard Amon presented to the town of Richland (represented by C. F. Breithaupt) the deed to Amon Park as a gift to the community. In 1912 a decorative stone archway was constructed to mark the entrance to the park. The original archway was destroyed shortly after the federal government began acquiring land in Hanford, White Bluffs, and Richland in 1943 as part of the top-secret wartime project that would ultimately come to be known as the Manhattan Project. It was also at this point that Amon Park was renamed Riverside Park.

In 1918 a well was dug for the convenience of picnickers, a bandstand was constructed in 1920, and in 1934 volunteers began construction of a community swimming pool and bathhouse at the north end of the park which officially opened on July 4th, 1936. Amon Park’s annual Independence Day celebrations have been a favorite of the community for generations. In a letter written by Estella Murray West, who grew up in Richland, she recalls that “Fourth of July at Amon Park was always something. One year we even had a May Pole dance. We always had fried chicken, home-made freezer ice cream, sponge cake and potato salad. And fireworks a-plenty.”

Over the last century the park has been transformed into picturesque grounds, perfect for a wide range of recreational activities for the community. Today an extensive path runs the length of the park the shore of the Columbia River that is ideal for strolls or biking. The park boasts an impressive children’s playground, tennis courts, and community center. Sprawling lawns under the canopy of hundred-plus year-old trees make for the perfect picnic spot and location for such family friendly events from car shows, art walks, concerts, cultural festivals and much more. A replica of the original park archway was constructed and dedicated by the Richland Centennial Committee on July 4th, 2010 approximately 25 feet northeast of where the original would have stood.

For more than a century Howard Amon Park has remained a popular community locale not only for Richland – the town that the Amons worked so hard to help establish – but for the Tri-Cities as a whole. 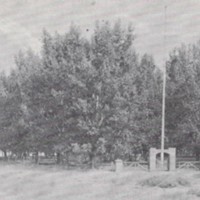