Velma Ray moved to Pasco, Washington to work on the Hanford Site during the Manhattan Project.

An interview conducted by the African American Community Cultural and Educational Society (AACCES) as part of an oral history project documenting the lives of African Americans in the Tri-Cities during the Manhattan Project and Cold War.

Those interested in reproducing part or all of this oral history should contact the Hanford History Project at ourhanfordhistory@tricity.wsu.edu, who can provide specific rights information for this item.

Vanessa Moore: This is an interview this afternoon with Miss Velma Ray. Velma is a Tri-Citian who was involved with work out at the Hanford Project during the Manhattan Project era, 1943-1945. And she’s here to share some of her information and experiences with us. Mrs. Ray, how are you today?

Moore: Great. I’m going to ask you several questions and you feel free to just share any stories or information that you would like with us, and we would appreciate that. First of all, let’s start off by finding out when you came to Hanford. What year was that?

Ray: We came to Hanford from Mare Island Navy Yard in California. I was working on the Mare Island Navy Yard and my husband was working. He was a cement finisher and I was a welder. And I went to school, their welding school. And they say I learnt how to weld quicker than any student went through that school. And I was out on the shipyard and I got two raises from the time we left. And so my husband he, I guess the man that my husband—I was drawing more money than he was, and he kept talking, why, if I could just make that Pasco job, if I could just make that Pasco job. I was wondering why he wanted to leave when I was making good money. And you know when we left there, we didn’t have time to get my check and we left my whole back check, you know.  And then we was in Hanford and we’d been working there I guess about six months, and finally, you know what, they sent me my money. And I wondered how did they find me?  Would’ve been too bad if I’d been a criminal, because they’d’ve found me anyway. Thank God I’m a Christian; I don’t think about that. But I just thank God that they did find me and send me my check. And I thought we was going to get a welding job in Pasco. But I didn’t. We went to work at the mess hall.

Moore: What year was that?

Ray: That’s the same year we got here.

Moore: How did you hear about it, or how did he hear about jobs out here?

Ray: I guess on the job where he working at.

Moore: What type of work did he do in California?

Moore: And, he decided to come, I understand, just looking for more wages, that he could do better here. And so you all came and brought the family. How many children did you have?

Ray: We had three children at the time and we had left them in Alabama with my parents.

Moore: Where did you first stay when you arrived here?

Ray: We had a little a trailer.

Moore: Was it in Pasco? Richland?

Ray: It was in Pasco.

Moore: What did this area look like when you came? The cities, were they big cities?

Ray: A desert, no, it was so––just almost a desert. It didn’t rain for about three years when we came out here. Didn’t see a drop of rain. And those dust storms would come up and I cried. And one time I went to wash my clothes and had the whole lot on the line. Time I hung the last piece up, a big dust storm come and broke the line. And I just cried and went in the house. I said, Lord, I just want to leave. If somebody give me a place here, I wouldn’t—I’d say, no thank you, you can have it. Because I was ready to go back to somewhere. I thought I was fed up with Pasco. But you know it’s a funny thing. There’s something about Pasco. When you come out here and you meet more people and you leave, you want to come back. And it’s just––I just thank God; it’s a blessing to be in Pasco.

Moore: Well, that’s great. You mentioned you lived in a trailer; did you ever at any time live in a one of the trailer camps out at Hanford, or the barracks?

Ray: Just the barracks. The barracks. And the women barracks, it was a funny thing. We could either go down to barracks where our husband at, because it was too dangerous, unless he come, you know. But they would come up to the sitting room. They would sit there just like courting, and then he had to leave here and go back to his barracks.

Moore: Were the barracks segregated by race at that time, or just male and female?

Ray: No, just male and female.

Ray: You want me to tell that?

Ray: Those men was raping women so bad. And so, I hate to tell this. Because one thing—see, I didn’t know it was dangerous as it was. And when I was on my way down to go—you know, a woman would go where her husband at at that time. Usually, usually you could go where he was, but this was a time, it was too dangerous. And I didn’t know that. And I don’t think he knew it. And I was walking down, then after while a man comes coming up to me, and I said, don’t you see my husband? And I just lied. And you know, God was with me. Because if I hadn’t’ve told them lies, I don’t know what they would have done.  But they was coming’ up to me, Lady, so-and-so––. I said, don’t you see my husband? And that was not my husband; that was just a man about as far from as that tree. And they would leave me alone. By the time I get that far, I had said, don’t you see my husband?––Oh, Lord, I had so many husbands!

Moore: It was a little bit scary.

Ray: And God took care of me. When I got to that barracks, I fell across that bed. I told my husband I was never coming down there no more. And I wouldn’t either.

Moore: I can understand.

Ray: But he would come up there and get me. Because I wasn’t going down there no more. I was so—I’m even nervous, now, just to think about what I would do.

Ray:  Girl, talk about some hard praying. I was praying every step of the way.

Moore: You mentioned when we spoke earlier that you also worked out at Hanford. And, tell us a little bit about what type work you did.

Ray: We did Mess Hall #2. Oh, there was so many people here. There was about five mess halls. There was quite a few mess halls. But I worked in Mess Hall #2. Another lady, we worked, and we was hotline girls. And food was already set up on a table when men come to the door to walk in. And it was two hotline girlsand we had to, it was plates, bowls with hot food. And when the mens come in that door, we would have to go by that couch and stack that food up on our arms about four or five dishes. And how I done it, I don’t know. But they taught us how. And then we get in a hurry, never stop walking, just giving them food from one side of the table to the other one. And by that time, get another one. In about five or ten minutes, the whole thing was set up. And me and that girl, we laughed about it because a lot of time, them bosses, they stand there and watch us. I see them smiling.  Because we were running, we set that table up so fast. They talked about how good we was.

Moore: It sounds like all of the needs of the workers were met, that this was not a place that they came in, like a restaurant, and bought their food. It was provided.

Ray: No, no, no. Just like, just like, you know, set the tables. And they had had everything else already set on the tables ‘cept hot food. And that’s all we had to put on there. That was why we could do it so quickly. They had the tables set up. Just that quick.

Moore: Tell me a little about your husband’s work. You mentioned he was a cement finisher. And what type of work did he do here? And did he talk about it? Tells us a little about that.

Ray: Well, I tell you what he done. He was a cement finisher in California, when we lived in California, come out here. He built some houses afterward. But when he working at Hanford job, we wasn’t allowed to talk. They had a sign up, talk with nobody about your work.

Ray: And we couldn’t talk about our work. So that’s why a lot time, we don’t even know what was going on, because it was a secret job. But I do know they was building ammunitions to fight.

Moore:  And, your husband’s name?

Moore: And now, basically, you were both contributing to the effort because the war was on at this time, right? Employer–wise, did you know what the company name was, or just the project name? That you worked for, was it the DuPont Company, or that he worked for--?

Ray: Well, I don’t think he worked for the same company. Because we was working for the people that served the food in the mess halls.

Moore: So it was all the same. Same company, Hanford Works.

Moore: Do you feel you were, that the working conditions, and how managers or supervisors treated the workers, what did you think about that?

Moore: You talked a little bit about the dust storms, and one of the questions I had is, what was the hardest— 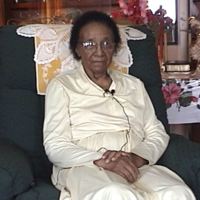