Virginia Crippen moved to Pasco, Washington in 1948 and was a successful business owner.

An interview conducted by the African American Community Cultural and Educational Society (AACCES) as part of an oral history project documenting the lives of African Americans in the Tri-Cities during the Manhattan Project and Cold War.

Those interested in reproducing part or all of this oral history should contact the Hanford History Project at ourhanfordhistory@tricity.wsu.edu, who can provide specific rights information for this item.

Vanessa Moore: --Vanessa Moore. I’m a member of the Triple-A-S History and Recognition Committee. This afternoon, I’m sitting here speaking with Miss Virginia Crippen. Virginia is going to talk with us a little about her experience here in the Pasco area in the early years in the ‘40s-‘50s timeframe and after that. So, Miss Crippen, we’re glad to be here and we appreciate you taking time to talk to us. First I want to start out by asking you, when did you first arrive in town?

Moore: What made you decide to come to this area?

Crippen: Oh, well, there was work here. I opened up a business here.

Moore: What kind of business?

Moore: Oh, so you had your own restaurant?

Crippen: Yes, I had my own place.

Moore: I see. Was that the type of business that you had prior to coming here?

Moore: And where did you come from, what state?

Crippen: I was born and raised in Texas, but I come from Portland, Oregon here.

Moore: What had you been doing there?

Crippen: Working in the shipyard.

Moore: What kind of work?

Crippen: I was a sweeper, they called it, at the shipyard.

Moore: So you decided to leave there and—

Crippen: Mm-hmm, I heard there was work here and there was no place for blacks to eat. So I come to Pasco to better my condition, I guess, that’s what you would call it.

Moore: And so then also provide something for black people that they didn’t have.

Moore: So was this just something you read about, that there were opportunities, or you knew someone who was already here by any chance?

Moore: Could you think of their names?

Crippen: Yeah, I knew Bertha Smith. No, I met them when I come here. Really didn’t.

Moore: Not too many people.

Crippen: Not too many people.

Moore: Where did you set up your business, your restaurant?

Moore: And why did you choose east Pasco?

Crippen: Because I didn’t have no other choice.

Moore: Why was that?

Crippen: Because they didn’t allow the blacks to have business no place else.

Moore: So there were restrictions for where blacks could work and live also?

Moore: At that time, about how many black people or families do you think, would you say there were living here?

Crippen: You know, there was—it wasn’t too many, but so many lived in the barracks. You know, men that couldn’t bring their families right away. They would come over.

Moore: So they lived in the barracks but they would come to—

Crippen: Yeah, and have chicken on weekends, barbecue.

Moore: What was the name of your business?

Crippen: It was really the Montana, but they called it the Chicken Shack. Or let’s go to Virginia’s.

Crippen: Uh-huh, or the Chicken Shack.

Moore: That’s good. Got to be pretty well known, didn’t it?

Moore: Let’s see here. Over the years, how did things go? Did you hear about what was going on out there? Did your customers say much about work out at Hanford?

Crippen: No, they really didn’t. Because I worked mostly by myself and I was the cook and the bouncer. [LAUGHTER] So I didn’t do much talking.

Moore: Did you serve liquor there?

Moore: Tell us what you think about the conditions for people in general living here, for black people living and working out here. Was it good, bad?

Crippen: Talk about Pasco, you know, I didn’t work out there. But we had it tough here. The bank wouldn’t lend you no money. It’s just luck that I worked all my life and I saved a little money to establish my business and make it the best I could. Because we couldn’t even borrow money from the banks. Even in Kennewick, you couldn’t borrow no money from no banks. They didn’t even want you in Kennewick, period, black people. Pasco wouldn’t lend you no money. It was just tough. But if you had your own money, you could survive in east Pasco.

Moore: And it sounds as though it’s a good thing that businesses like yours were here.

Moore: Because what other choices did the blacks have? Could they go eat anywhere they wanted to?

Moore: Stop for a second. I’m trying to--

Crippen: Don’t put it on my yet until you tell me—

Moore: Virginia, I wanted to ask you a little bit more about your business. Did you have any specialties? What did the customers like to come in there most for?

Crippen: Not really. But everybody think it was a special recipe, because I—I have told people how I fix it, and they say they go home and fix it and it didn’t turn out like that.

Moore: Did you only have black customers? Did other people come in?

Crippen: No, I had Spanish and white. And black.

Moore: Tell me a little more about that. You said something when we were off-tape.

Crippen: Well, I fixed orders to take out, and I barbecued, fixed turkeys for people to take out. They was white. But I did have a lot of white customers that come in and sit down and eat, and Spanish, and blacks. So we mixed and all got along good.

Moore: And you were willing to serve everyone?

Moore: Now, was it like that throughout the area, or were there other businesses who did?

Moore: So this was during the ‘40s, during that time.

Moore: Were there signs saying no coloreds? How did—

Crippen: No, I didn’t see a sign. But when you get there they say, sorry, we just can’t serve you.

Moore: For no reason. Were there other black-owned businesses?

Moore: Was that located in Pasco?

Moore: And tell us again why most blacks lived in east Pasco.

Crippen: Because they didn’t have no other choice. They lived in tents, cardboard houses, made the siding out of cardboard, the top canvas. The best they could do, because there was no place to live and it was work out at Hanford.

Moore: Is that where most of the blacks worked?

Moore: So we have to presume the money was pretty good.

Moore: They’re willing to live in those conditions to stay here.

Crippen: Had a restaurant, too.

Moore: Oh, she did? What was her restaurant called?

Moore: So later on as Hanford kind of wound down and people stayed in the area, could you tell us a little bit about how the area changed? Or maybe even before that, what did it look like when you got here? Were there a lot of houses, or just a small—

Crippen: No. It’s sagebrush. [LAUGHTER] There wasn’t many houses. East Pasco didn’t have—very few. And then white people lived in east Pasco. Because it wasn’t many blacks when I come. But it was some blacks but it was no more—I can’t remember but five families at most, or four.

Crippen: Been here for years, yeah, when I come here.

Moore: So the Manhattan Project had actually finished up by ’48 when you came, but blacks had remained.

Moore: Are the names of any people that are still here now that were here back then that you can recollect?

Moore: Now, did you raise a family here, too?

Crippen: I had one son.

Moore: Virginia, I want to ask you a little more about some of the other businesses. Tell me about Johnny Reed.

Crippen: Johnny Reed had a club.

Moore: It was a dance club?

Crippen: Yes, they could dance. And I had barbecue and chicken, too. It was like an after-hours club.

Moore: So he served liquor there, and was it a popular place?

Crippen: Yes, it was. Now he had practically all white, but blacks went, too. But he had a lot of white customers. In the beginning—it was afterhours.

Moore: Where was it located?

Moore: Another local business owner, Tommy Moore, could you tell me a little bit about him?

Crippen: Oh, yes, Tommy Moore had a business downtown by the underpass. It was a beautiful place, a brick—a hotel and a downstairs restaurant, very nice place.

Moore: Do you remember the name of his restaurant?

Crippen: No, I don’t. Been so many years. So we just said—everybody just said, going down to Tommy’s. [LAUGHTER]

Moore: There was somebody named Jackson, Jackson’s Tavern?

Crippen: Yes, he had a nice little tavern. He built it. It was nice and had a restaurant in it. It was really nice.

Moore: And then Sally’s.

Moore: You had a little competition.

Crippen: [LAUGHTER] Really? But Sally sold lunches. I didn’t have nothing but chicken and barbecue, but she had pies and everything. She had good food.

Moore: And was there a business owner named Lillian that you recall?

Moore: So there were business owners that had restaurants and places to eat and places to go for recreation and there were other services that blacks needed, of course, like get our hair done or the barber. Were there people to provide that?

Crippen: No, not really, until later. Then Mrs.—she had a nice beauty shop.

Moore: So there were more opportunities for people to come in and set up businesses.

Moore: Now, before that, what was the experience like trying to have some of these things, just at white-owned businesses? If I needed to have some dry cleaning done or my hair done?

Moore: How about shopping for clothing or groceries?

Crippen: Oh, yes, you could go in all the grocery stores and dress shops and all and spend your money. And they treat you nice. You know, you spending your money. But you better not go to the bank and ask to borrow some money. You could put money in the bank, but you sure couldn’t borrow any money from the bank.

Moore: So there were just certain boundaries that were set.

Moore: Okay. I want to thank you for taking time to give us this information. If there are names of other people that we should speak with, we have some—also some photos that we’d like to show you here later and there may be individuals that you recognize and we do appreciate—the History and Recognition Committee appreciates your time and the information that you’ve provided and everything you’ve done for the community. Thank you very much.

Moore: Testing the microphone to see if it’s working.

Vanis Daniels: --but I can’t remember where I know him from. She look a little bit like Miss James. Miss James’ sister.

Crippen: Oh, Miss James had a trailer court! Y’all got that?

Daniels: She just got through telling us that.

Crippen: Sure, she didn’t lie when she told you. Wasn’t no black church. I remember when they built Morning Star. And he died, little old short guy.

Crippen: And he had children here. You know she played piano for New Hope—not New Hope, Greater Faith all the time. She hasn’t been dead that long. Mary?

Crippen: Mary Calhoun played the piano. But he sure did, he— 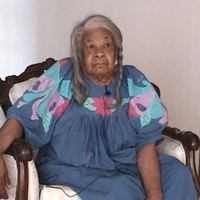